Driverless cars for the next decades in 4 steps

Driverless cars will become reality during the following years or decades.

We can classify this evolution in 4 steps:

Technically cars can sometimes self drive themselves in a static environment for a reasonable price: When parking themselves. This is legally allowed worldwide because the driver still controls the speed at which self parking is occurring.

Technically cars can self drive themselves in all dynamic environments for an unreasonable price. This is legally allowed in some US states but a licenced driver needs to be present at the driving seat.

This step can be divided in several sub steps which are different only in the degree of involvement drivers will be required to have or freedom that they will have. It is the last step where technical issues are involved.


Next year’s Mercedes-Benz: having hands off the wheel for 10 seconds

Technically cars can self drive themselves in some dynamic environment for an “affordable?” price: on highways during stable conditions and in traffic jams. This may be legally allowed worldwide because the driver is allowed to not touch the steering wheel for 10 seconds maximum.

Why did Mercedes-Benz chose that the maximum allowed was 10 seconds and not 5 or 20 seconds? This question is triggering the next sub step.


1 minute (and more) free on highways and traffic jams

“How long end drivers are allowed (technically and legally) not to pay attention to road” will be the most interesting thing to watch for the next 5 to 10 years and especially:


End to end autonomous but car has both manual and self driving mode but a licenced driver is still required to be at the helm.


In the 2 last steps, no technical improvement happens anymore. These steps are about business and environmental changes.


step 2: everyone can operate a driverless car

This step will be reached when it will be not required to have a driving licence to operate a car. All technical issues have been solved.

As in previous step, maybe unlicenced driving will be allowed on some specific, secured, well known trips or when some specific conditions are met (i.e. at specific hours when overall traffic is light).

If driverless cars can be completely autonomous on all or most trips and operated by unlicensed driver, the several features of today’s cars are not needed anymore such as steering wheel, pedals, mirrors... Maybe the driving console can also disappear and the only device you need is a smartphone to enter the trip and poll the time of arrival.

Compared to previous steps, there is no technical improvement any more. Only cab companies are now allowed to own cars and have them maintained.

Cars are now as safe as trains. Liability has shifted from the driver to the car manufacturer. Auto insurance clients are no more end users but rather auto manufacturers, auto repair shops or and cab companies.
Parked cars no longer clutter streets and supermarkets parking lots.

You order the car you need for shopping at the local supermarket or for several hours vacation trip with the whole family.

Everyone becomes James Bond in "Tomorrow never dies" where he drives a car with a remote. 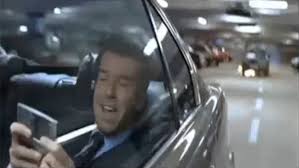